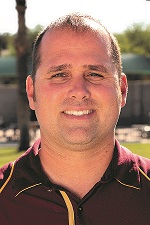 Greg Mahon
Coach Greg Mahon started swimming at the age of 5. He swam for several local clubs, including Rio Salado Swim Club under double Olympic Gold Medalist Mike Troy. In his 8th grade year, Team Arizona went to Canada for an international meet where Coach Mahon won the 400 meter freestyle event. During his club career, he earned multiple Arizona State championships as well as qualifying to nationals in numerous events in USS swimming, including a Far Western Championship. In his High School career, Coach Mahon was a 6-time City Champion and 6-time State Champion. He was the Arizona State High School 500 Free Champion freshman year at Corona del Sol. When Mountain Pointe opened its doors his sophomore year, Coach Mahon won the school’s first state championship award. During both his sophomore and junior years, he won the Arizona State High School 200 and 500 Free Championships, junior year earning the high school state records in both events. In his senior year at Mountain Pointe, Mahon won the Arizona State High School 200 Free. Coach Mahon earned a scholarship to swim at University of Nebraska. Mahon returned home to train for the Olympic trials and retired shortly thereafter from swimming to start a career in coaching.  He coached at Phoenix Swim Club and Rio. Coach Mahon started a new career as a chef in 2007 and is now the Culinary Instructor at Maricopa High School. Greg and his wife Tracey have two children, Declan, and Sophia.

Blake Glanzer
Coach Glanzer began swimming at a young age and has been around the pool ever since. He started coaching the diving team at the Pecos Pool when he was 18. Several years ago, he was excited to accept a bigger challenge and joined MPHS Swim & Dive team. He has had a great time and has enjoyed every moment.

Lisa Mancuso
Coach Lisa Mancuso graduated from Northern Arizona University with a Bachelor of Science in Business Administration in 1992. She was a scholarship swimmer on the university’s swim team for four years, swimming primarily the 100 & 200 Breaststroke and the 200 IM. Lisa was captain her senior year. Immediately after graduation, Lisa returned to the valley and was awarded with the opportunity to build a U.S.S. program in Chandler, where Lisa managed and served as head coach of the “Chandler Aquatics Team”. In 1998, the team merged with Desert Aquatics, now Desert Thunder Aquatics. Lisa has been coaching high school swimming since 1999, first with MP, then Desert Vista, then returning to MP in 2002. Also, upon college graduation, Lisa began her business career working at the Apollo Group, Inc/University of Phoenix and is currently employed at Avnet, Inc. in Tempe. Lisa and her wonderful husband Ron Lussow, live in Gilbert. Lisa is step-mom to three terrific kids, Connor, Cassidy, and Christian and is mom to her magnificent and precious terrier-mix, Dingo, rescued adorable furry little boy, Buster, just rescued sweet Roxy girl and her amazing cat, Mr. Oreo.